Staying in Caithness -
cottages to rent in the northernmost part of Scotland.

For a remote getaway it is hard to beat a self-catering holiday in Caithness. The desolate and wind-swept landscape has an amazing beauty and the coast is simply stunning. There are many archeological sites to visit in Caithness as well as over 30 castles to tour; some are in ruins, some hold treasures and some play host to events and festivals. Girnigoe Castle, owned by the Clan Sinclair, was once a spectacular Renaissance fortress overlooking the sea. It is now listed on the World Monuments Fund and is undergoing extensive preservation; visitors are welcome to wander around the site.

Selfcatering accommodation to rent in the Scottish Highlands 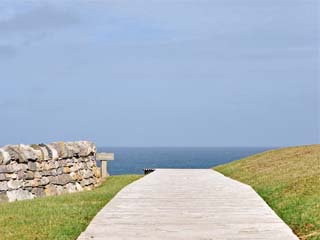 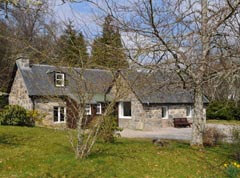 In the nearby town of Mey the former Barrogill Castle sits proudly surrounded by stately gardens. The late Queen Mother had bought, renovated and re-titled it as The Castle of Mey and spent many happy summers there during her lifetime. The gardens and visitor centre are open to the public daily and it's considered to be one of the best attractions in Caithness, having been awarded 5 stars from the Scottish Tourist Board.

Freswick Castle is an impressive 18th century structure built upon a Viking settlement. It is home to The Wayfarer Trust, a group dedicated to developing the arts. Each year writers, painters, photographers, poets, musicians, sculptors and performers retreat to Freswick Castle and engage in a creative community.

Keiss Castle, although not open to the public, is one of the most well-known castles in Caithness due to its position on top of sheer cliffs overlooking Sinclair Bay. Take a tug boat around the coastline for great photo opportunities.

Caithness is a place rich in ancient heritage sites: discover areas of archaeological wonder from as far back as the Iron Age. The Wag of Forse consists of an excavated dwelling from Pictish times and includes remnants of a staircase, pieces of pottery, walls and a roof post. The Whitegate Broch is another site from around the same era and can be reached on foot only. Norse influences have been linked to several archaeological sites in Caithness such as Grey Cairns of Camster, the Stone Lud and the Hill O Many Stanes. Learn more about their past and that of The Stone Circles of Caithness at the Archie Sinclair Fossil Centre.

Getting to Caithness couldn't be easier; by land, air and sea there is a route for all. Wick Airport is located north of the town and offers direct flights to Edinburgh, Newcastle and Aberdeen. The railway service provided by Scotrail offers the Inverness - Wick / Thurso line and Scottish City Link coaches run the length of the country. Pentland Ferries, the John O'Groats Ferry Company and Northlink Ferries transport passengers from Caithness to Orkney daily.

Caithness is a place of great interest and with numerous museums, historical sights and an alluring natural landscape visitors will continue to choose this as a self catering holiday destination for many years to come.