Self-catering accommodation in the Scottish Borders

Self-catering holiday cottages and houses in the Scottish Borders

Edinburgh apartments and holiday houses in the Lothians

Staying in the Scottish Borders

The borders of Scotland with England was much fought over land till the mid 17th century - towns were sacked and rebuilt and most settlements were fortified. The magnificent abbeys at Melrose, Kelso, Dryburgh and Jedburgh were destroyed and repaired many times until the Reformation led to their final destruction. As well as the English, the Border Reivers (powerful border families) fought amongst themselves and stole cattle. The fast-flowing rivers Tweed and Teviot are famous for salmon and trout fishing, and their waters used to drive the woollen mills (the Border towns are still famous for their textiles). If you are staying in a holiday cottage in the Borders during the summer, then try to see one of the Common Riding Festivals, unique spectacles. Riding is particularly popular here and there are plenty of riding centres offering pony-trekking. The annual week long walking festval is also very popular with visitors to the area.

On the Borders' coast, fishing and smuggling used to be the most important activities. St Abbs is a pretty village with narrow streets running steeply down to the harbour. Some of the brightly painted fisherman's cottages are now available for holiday rentals, and as St Abbs has a sandy beach they are much sought after. Eyemouth is a small seaside town with amazing cliffs and caves.

Beautiful holiday cottages to rent in Borders of Scotland 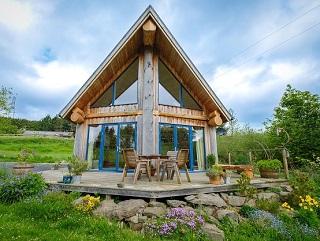 The Tweed Valley is a popular location for cottage holidays in Scotland as it is a particularly beautiful part of the Borders. The River Tweed is one of the most famous salmon rivers in the world, and it meets with the Teviot at Kelso. Kelso has a fine Georgian square and Kelso Abbey, which is one of famous Borders' Abbeys. Nearby Floors Castle, is an Adam house and was added to by William Playfair and is open to the public. It has a magnificent collection of paintings, porcelain and tapestries, and is home of the Duke of Roxboroughe. Mellerstain is one of Scotland's finest Georgian mansions, with fabulous formal Italianate gardens.

Dryburgh Abbey, west of Kelso, is another of the Border abbeys founded by David I, and is a beautiful ruin. Melrose Abbey was perhaps the most beautiful of the four abbeys, and Robert the Bruce's heart is believed to be buried here. There are many fine Border's towns and there is plenty of luxury holiday accommodation available to rent in Kelso and Melrose and the surrounding area.

Abbotsford House was home of Sir Walter Scott and was built by him - it is a mock Scots Baronial house and there is plenty of Walter Scott memorabilia on display. Selkirk is a good place to buy tweed and other woollen goods, as is Galashiels - both are great centres near which to base your cottage holiday in Scotland. Traquair House is particularly famour for the gates through which Bonnie Prince Charlie passed on his march to Derby - they were shut by the fifth Earl of Traquair who vowed they wouldn't be opened until a Stuart king ruled Scotland (and so they have never been opened again). The River Tweed runs through Peebles, which is an old town with narrow streets and some fine buildings.

Roxborough and Jedburgh are in the Teviot Valley, which is particularly worth a visit if you are in Scotland for an autumn break as the colours are fabulous. Jedburgh Abbey is another dreamy ruin, which echoes with the ghosts of the past. Hawick is another well known Scottish borders' town and is famous for its Rugby Sevens.

The Border region of Scotland is a fascinating place for a holiday - there is a wealth of historical sights and abbeys, set amidst fabulous scenery. Holiday cottages in the Borders range from country cottages, Scottish castles to town houses - Big holiday houses for large groups, as well as smaller cottages for couple, and families - all of them delightful places to rent for a memorable holiday in the Scottish Borders.

FAQ about visiting and staying in the Scottish Borders of Scotland which vacation activities to do and where to go?

Are the Scottish Borders not just the dividing line between England and Scotland rather than a county?

Not quite. The Scottish Borders is now termed a county, and comprises of the historic counties of Berwickshire, Peeblesshire, Roxburghshire, and Selkirkshire and impinge on the similarly historic counties of East Lothian and Midlothian. The actual 'border' runs 108 miles (174 kilometres) from North of Carlisle to north of Berwick upon Tweed taking in its most southern extremity.

What are the towns in the Scottish Borders?

Galashiels and Hawick are the two biggest ones, with Jedburgh, Kelso, Peebles and Selkirk being some of the better-known smaller ones, although Coldstream, Melrose and Eyemouth while considered very small towns, are nevertheless very well known.

What is there for my family holiday to do in The Scottish Borders?

The Scottish Borders remain one of the great overlooked places to visit, because generally people are just passing through to Scotland or England! There are ancient abbey ruins, stately homes, castles, the surprisingly intact remains of the imposing Jedburgh Abbey, Sir Walter Scott's home, Abbotsford House in Melrose as well as the famous Melrose Abbey ruins, places to take traditional afternoon tea, falconry, tomahawk throwing, even a trip to the imposing (and Scotland’s largest inhabitied) Floors Castle in Kelso and much more!

What are the best holiday cottages to rent in the Borders?

The Scottish Borders is a large geographical area, so you'll have no problem in finding a suitable holiday cottage to rent. You can opt for a stay in the unspoilt countryside, or perhaps you'd prefer to be near a town, maybe near the coast, or just off the main A68 arterial road though the Scottish Borders. Here's our top picks:
Self-catering in Kelso town centre
Stay in an Ancient Tower on the River Tweed
5 star Stables cottage in Melrose
A secluded retreat near Hawick
Cottages near Biggar and Lanark
Scottish castle with self-catering holiday accommodation
A farmhouse sleeps 6
A large country house in the Borders sleeping 10