Stirling and the surrounding countryside offers a very good selection of holiday cottages - pretty farmhouses, castles to rent and plenty of luxury self catering cottages. The town is dominated by the castle, situated on top of a volcanic rock, visable for miles around. Stirling's strategic position on the route north meant that it was bitterly fought over and there were many battles nearby. Stirling Castle has much to see and rivals Edinburgh Castle as one of the top places to visit in Scotland. There are also many events during the summer on the castle esplanade: beating the retreat or a solo bag piper are a memorable holiday sight. The Old Town of Stirling leads down the hill from the castle and the cobbled streets have plenty of historic buildings and museums. Bannockburn, with its imposing Robert the Bruce statue and heritage centre, is just south of Stirling.

The Wallace Monument is a tall Victorian tower and is another very visable landmark. You can climb to the top and on a clear day will have great views over Stirlingshire and the Campsies. Bridge of Allan was a Victorian spa town - it has some excellent small shops and a great deli - essential if you are renting a holiday cottage in Stirlingshire and want to minimise cooking! Dunblane's ancient cathedral is mainly 13th century and the cathedral close has some fine buildings, including the Leighton Library and Dunblane Museum. North of Stirling is Blair Drummond Safari Park - if you are on holiday in Scotland with children then this is a great day out. Doune and its castle are another popular attraction, with some great walks. 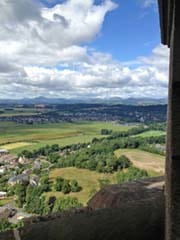 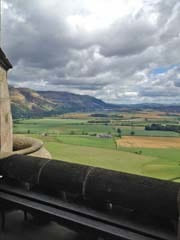 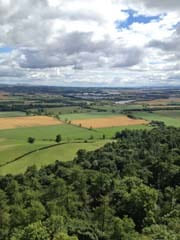 The Falkirk area is the heart of industrial Scotland. Tourists often pass through without stopping but there are some interesting places to visit and a wealth of history. In Falkirk itself, Callendar House is fascinating - Bonnie Prince Charlie stayed here on his retreat north. Parts of the Antonine Wall can be seen in the area - it was constructed by the Romans in AD 141-2 between the Forth and the Clyde but was quickly abandoned and the Romans withdrew south to Hadrian's Wall. The Pineapple is a well-known folly - a vast stone pineapple which was once used for growing pineapples and is now a holiday home. Castle Campbell, near Dollar, is a 15th century ruin with great views from the top. The Mill Heritage trail runs through the Hillfoots villages at the foot of the Ochils: Dollar, Tillicoultry, Alva and Menstrie.